This Column is about Columns...and Democrats and Republicans 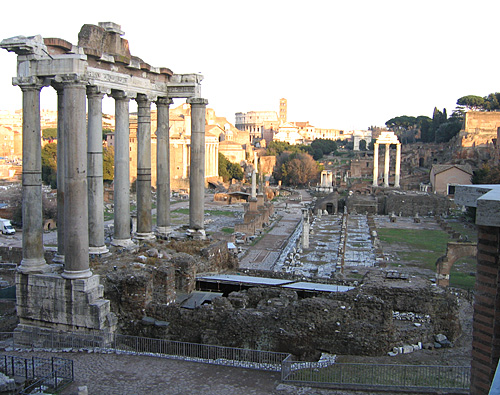 The Latinteach blog usually doesn't mention politics, but the politicians are now talking about the Greeks and Romans, so...

John McCain's official website has recently posted a video (link no longer available) in which Fox News Channel commentators criticize Barack Obama and the Democratic National Convention for erecting "Roman" columns at Invesco field in Denver. Rush Limbaugh also criticizes the set on his website, although he identifies the columns as Greek. He also likens Barack Obama to a Greek god -- in an attempt to stereotype him as an elitist.

TalkingPointsMemo.com points out, succinctly, that the columns are no doubt intended to evoke the image of the Lincoln Memorial and Martin Luther King.

At any rate, take a look at the set where George W. Bush made his acceptance speech in 2004 at that year's Republican National Convention, courtesy of Politico.com.

By the way, for those of you who love Classical Rhetoric, did you catch the antimetabole (similar to chiasmus) in President Clinton's speech this evening? Antimetabole and chiasmus are two similar types of interlocking word order.

"People the world over have always been more impressed by the power of our example than by the example of our power."

(Visit Silva Rhetoricae, the Forest of Rhetoric, to find out more about the ways orators use the power of word arrangement to artfully craft their speeches.)

Image of actual Roman columns courtesy of Vroma -- where you can find many more pictures of both Greek and Roman columns!

Posted by latinteach at 1:02 AM

"Language is an art, and we proceed from art to science, from idiom to accuracy; the idiom, the feeling for a language, is easily taught thus, and accuracy can wait...The process is: first imitation, next imitation with a difference, lastly the use of what has been so learnt."
W.H.D. Rouse and R.B. Appleton on the teaching of Latin.

Visit LIBELLI LATINI if you would like to ensure that the Tar Heel Readers you or your students are reading have been reviewed and approved for correct Latin usage by Latin teachers and professors.

NEED TO LOOK UP A LATIN WORD?

LATIN WORD OF THE DAY